About a year ago, venture capital investor Fred Wilson unleashed one of my favorite tweet storms. It was brief, but powerful.

1/ whenever i find myself doing a mundane rote task, i ask myself if it would be quicker to write a script and automate it or just do it

2/ the answer is always, if i’m going to find myself doing this again, write the script and automate it

3/ but i often convince myself that this is a one time thing and i’ll never find myself doing this stupid thing again. so i do it manually

4/ and i get that wrong pretty often. and then i find myself doing it again, and then i ask myself the same thing and rationalize it again

5/ i wonder what that says about me and human behavior in general. is optimism a blessing or a curse?

Fred gets it. It is almost always faster in the long run to automate a mundane task, even though it requires an upfront investment in time to get the automation running smoothly. But again and again, we choose to do these tasks manually.

Why? There are all sorts of reasons behind these choices. We underestimate how many times we’ll repeat the task. We overestimate the amount of time it will take to establish an automated routine. We’re on a tight deadline, and there’s just no time to think about anything but the task at hand.

Sometimes, we just don’t know how to automate it in the first place.

[Get the free eBook: “Maximizing Sales Productivity with Salesforce Lightning.”]

This is especially true for sales teams. Think about it: How many SDRs know their way around a command-line interface, let alone have the basic programming chops to write a script automating a multistep task? How many sales managers do?

These little tasks add up. Tasks like the “Click-Edit-Save” cycle of updating a flurry of sales activity in the CRM, or scanning through a list of leads to catch and remove any dupes from an outbound campaign. Though small, over time these tasks drain the productivity of an otherwise fantastic sales team.

Most of the time, it’s up to the sales manager to invest in automation tools that help a sales team make the most of their time. And it’s also the manager’s responsibility to make sure reps adopt these tools. They might protest. It can sometimes seems faster to do things manually than to take the time to learn a new system, or piece of software.

But automation works. Look at auto dialers as an example: If it takes an average of 6 seconds to dial a 10-digit number, a sales rep is spending 10 minutes just pressing numbers on a phone for every 100 calls made. If a rep is making more than 100 calls a day, that adds up to more than an hour a week.

Persistence and the Human Element

Still, it’s critical not to automate too much of the process. If the entire sales cycle could be done automatically, you wouldn’t need reps at all. The trick is to automate the tasks where time is really being wasted, then reallocate that time to tasks where it can add the most value like research, strategy and personalization.

We know there are two key truths that make salespeople successful. The first is persistence wins. Too often, sales reps stop following up after 2 or 3 attempts, whether because they forget, they don’t think it’s necessary or they’re just lazy. But numerous studies show that getting in at least 7 touches will make a deal more likely to advance.

The second truth is that personalization is extremely effective. The thing that sets a great salesperson aside from an average salesperson is the ability to connect with people at a deep level. We can all tell when someone is being genuine and when someone is faking it.

And therein lies the dilemma – how do you balance automation with personalization?

Automating too much of the process can actually set you back in terms of sales productivity. If the ultimate goal is to close deals and increase revenue, some interactions require a level of personal attention that automation can’t (and very often shouldn’t) provide. If sales reps use an automated marketing solution and it sends a follow-up email that says, “Hey – haven’t heard from you in a while” to a prospect that’s about to close, it could torpedo the deal.

Mistakes like those can be hard for a machine to spot but easy for a human to catch. A computer won’t know if a sales rep bumped into a prospect at a conference, or just received a Twitter DM with a commitment to buy. By maintaining a human layer on top of the automation, sales teams can avoid embarrassment, reduce errors and close more deals.

Personal relationships take time and patience to nurture. Good email templates don’t write themselves. You can’t just type “stakeholders at {Prospect Company Name}” into Google and find a list of everyone you need to win over to close a deal (though it’s worth trying).

When you find the right balance between personalization and automation, that’s when you can truly achieve maximum effectiveness and efficiency as a sales rep. 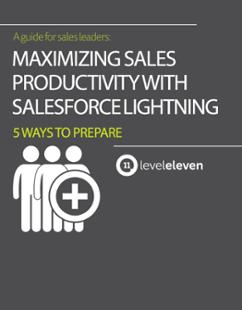 The Difference Between Engagement & Productivity – Why You Need Both