It’s pretty simple: If you’re one of the cool kids, you’re talking about sales development. If you’re a sales leader at a high-growth company, especially in tech, you’re probably hiring for it.

And why wouldn’t you be? Research shows that dividing your team into those who prep leads and those who close them works. InsideSales and the Kellogg School of Management conducted one study that revealed how having a business development team can raise the close ratio 7 points — meaning your 10% close rate becomes 17%.

Think about the effort it takes to convert leads today. Craig Rosenberg, Co-founder at research and advisory firm TOPO shared in a blog: “To sum it up: it can take 60-90 dials to get an appointment with a prospect, which is not an efficient use of a quota-carrying sales person’s time.”

Plus, having a sales development role means you have more resources to strengthen what’s happening at the top of the funnel. We’ve all seen the stats around faster lead response times boosting conversion rates. Dedicating a team to sales development lends itself to that sort of optimization, along with other conversion improvements.

The Challenges of Building Your Sales Development Team

Google “how many SDRs to hire,” and you’ll find an almost overwhelming number of ideas. Craig Rosenberg, for example, says: “The best way to determine the number of SDRs needed is to decide on your ratio of SDRs to sales reps. We [at TOPO] believe the optimal number is 1 SDR to 3 sales reps.”

Others suggest basing hiring numbers on sales activity demands. Zorian Rotenberg, Founder and CEO of business intelligence solution InsightSquared, says: “Don’t think of it as a function of headcount – focus instead on how many opportunities each of your SDRs is able to produce in total per month (or per quarter) when you’re building or scaling your sales team.” (SalesLoft breaks down the math behind this method in a good read here.)

Regardless of which approach you take, challenges come with building a sales development team. We’re talking about a role with an average tenure of 14.2 months, as Craig shared at Rainmaker. That means you better onboard quickly.

We’re also talking about a role that many companies treat as a platform to prep team members for becoming closers, rather than as its own destination. Between that and the amount of objection SDRs face, keeping these team members motivated takes work. Sales development leaders need to hire the right personalities and put together a strong sales performance management plan that includes plenty of recognition.

Then there’s the pressure that comes with leading such a valuable role. As Stephen Meyer, CEO of the Rapid Learning Institute for online education, wrote in Forbes: “Leading a sales development team is management intensive and stressful. In many organizations, the process of generating high-quality leads is the company’s biggest cost center, and inefficiency can kill profitability.”

Many credit Aaron Ross’ Predictable Revenue for putting popularity behind sales development in 2011. Although it found its trendiness then, the premise of sales development has been around since at least the ‘80s, according to SalesLoft. Sure, the technology around it has changed. It will continue to. But the point is: There’s more knowledge out there around what works in sales development than you may expect.

If you aren’t already, tap into that knowledge. Use it as guidance in testing what kind of sales development structure works best for your organization. Eventually you’ll find your way to the likes of that 7-point higher close rate and greater efficiencies in the sales process leading up to it.

Speaking of tapping into that knowledge, check out our new eBook for sales development hiring tips from top sales influencers: 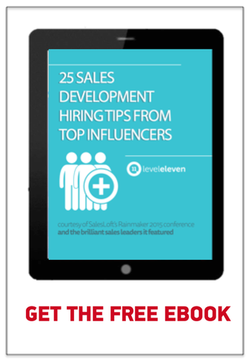