Miss Reid Hoffman’s keynote yesterday at Dreamforce ’14? It was a good one! But even if you couldn’t make it, he’s an interesting guy worth learning about. So get to know LinkedIn founder Reid Hoffman with these 9 fast facts!

1. Reid Hoffman is most famous for being the founder of LinkedIn. Before that he sharpened his business skills as the COO and executive vice president of PayPal.

2. While at Paypal, Hoffman worked with fellow Dreamforce keynote and Yelp founder Jeremy Stoppelman. They are both members of what has become known as the “PayPal Mafia,” a group of successful entrepreneurs who got their start at PayPal.

3. As the founder of LinkedIn, it should come as no surprise that Hoffman is a networking junkie. On his personal blog, Hoffman wrote a great piece about being “network literate,” and the importance of navigating one’s network to solve professional problems. A must read for all professionals!

4. Hoffman has a BS in Symbolic Systems and Cognitive Science from Stanford and an M.A. in Philosophy from Oxford. Not exactly your classic college dropout entrepreneur.

5. In David Kirkpatrick’s book The Facebook Effect, Hoffman is credited for arranging the first meeting between Mark Zuckerberg and Peter Theil. Theil ended up investing $500,000 in Facebook in 2004 and taking a seat on the company’s Board of Directors.

6. Hoffman is a board member of the prolific Silicon Valley investment firm Greylock. He runs a $20 million fund that was established in 2010 exclusively for seed and angel investment.

7. Hoffman lists one of his biggest regrets as declining to invest in Twitter during the social network’s early days. Had he decided to invest in the company, Hoffman would have achieved the social media hat trick, playing an influential role in the development of Twitter, LinkedIn, and Facebook. Alas, he’ll just have to settle for the latter two.

8. Hoffman is the owner of an extremely extensive LinkedIn profile, as you might expect from the founder of the service. He even offers advice about how to get into contact with him, although he notes without a strong connection to his network, chances of catching his ear are extremely slim. Still, Dreamforce might be your best chance!

9. One final LinkedIn fact: Hoffman only has two endorsements for the skill of “LinkedIn” on his LinkedIn page. If there’s anyone qualified in using LinkedIn, it’s Reid Hoffman!

See the whole list of Dreamforce keynotes here, and make sure you visit our booth, located at Moscone N1123. We’ll be announcing exciting product news, talking all things sales, marketing and tech, and will even have a putting a green where you can show off your skills and potentially win a great prize. View our full Dreamforce schedule on this page — and don’t forget to check out our eBook with essential tips for doing Dreamforce like a pro. Click the cover below! 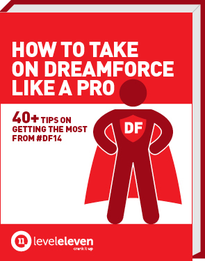 Article Name
9 Fast Facts on Dreamforce Keynote Reid Hoffman
Description
Miss Reid Hoffman's keynote yesterday at Dreamforce ’14? It was a good one! But even if you couldn't make it, he's an interesting guy worth learning about. Get to know LinkedIn founder Reid Hoffman with these 9 fast facts!
Author
Jack Flynn
Publisher Name
LevelEleven
Publisher Logo